Sometimes ideas — and food photos — don’t make it past the drawing board.  But instead of relegating them to the scrap heap, I have fun with them!  Take “Okie Caviar,” for instance.  While I wish it were Beluga and a glass of imported champagne, alas…  What you see are capers and Shiner Bock (imported from Texas!) — sort of a redneck substitute (I admit), but salty and sublime.  And the photo was begging to be seen.  (Love that “cartoon” feature on the photo editor…) 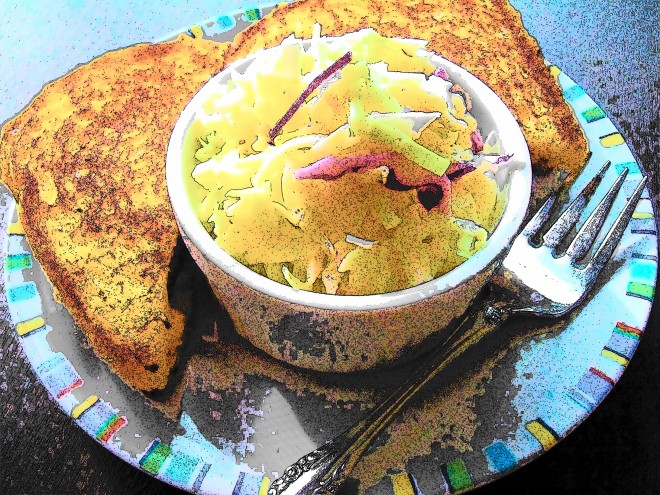 There’s something mainstream and American about this coleslaw photo that appealed to me, especially in “cartoon” mode.  Blame it on my diner days — and quite possibly Alton Brown.  A Patty Melt with a side of slaw gets my vote every time.  (By the way, if you haven’t read Alton’s cookbook/travelogue, “Feasting On Asphalt,” I highly recommend it.)  (His photos are better, too.)  But we have food — and fun — in common!

Then there’s my attempt at color-enhanced cartoons, such as these festive quesadillas — don’t say I didn’t warn your eyeballs!  But, I liked the effect.   Hope you do, too!

Bread pudding with Bourbon Sauce, Take Two Hundred and Fifty Six…  I was having trouble with the sauce oozing that day before I could photograph “the perfect drizzle”… plus, it was neon yellow.  Oh well.  Just had to show you the new plate. :)

The next photo/cartoon requires a brief explanation.  We live on a lake.  We love to fish.  My sister knows this.  Quite frequently she bestows “fish” gifts upon us that delight our hearts.  Fish books.  Fish measuring spoons.  Fish cookie cutters.  We love them!  As a result, I tried to cram as many of them into one picture as I could, but you know the old adage… less is more.  Still, there’s something about this photo that says “lake lovers” all over it.  Welcome to my blog. :)  (By the way, my Savory Cheddar Crackers recipe is posted on Tasty Kitchen if you’re so inclined.)

In a final attempt at “food art,”  the following photo employs “text” within the photo.  I think the caption says it all.  Food is about enjoyment, whether it’s photogenic or not (as long as it tastes good!) and to me, it’s a blessing to prepare meals for the people I love.  How about you?