Did I ever mention it’s hilly around here?

Three weeks ago the hubby’s pickup rebelled.  He tinkered.  He monkey-wrenched (at least I think that’s what he used.)  He scraped three knuckles and an elbow.  He crawled under, climbed over, and hunched motionless, pondering the perplexities of an ’85 engine antiquated enough to be coaxed with a bit of muscle — yet new enough to contain a “computer” — which, in his opinion, is unnecessary.  Unless it doesn’t work.

Two trips to the parts store and five scavenger hunts in the junkyard later, he shook his head at his still-defunct truck, put his hands on his hips and muttered: “It’s toast.”  Not as in: “yummy, slathered with butter, I look forward to this on the weekends” kind of toast.  TOAST.

As in: Too Obsolete And Stupid Truck.  (His succinctness floors me at times.)  I don’t call him The Man of Few Words for nothin’.

With only one vehicle and two jobs, somebody had to make the schedule sacrifice.  Yup.  That would be me.

The first week I got up at 4:30 a.m., drove the hubby to work, and dashed home to enjoy an hour and a half of solitude (or an hour and a half less sleep, depending upon how you look at it…), then filled my “spare time” with all the things working women cram into rare moments of “newfound leisure” — laundry, house-cleaning, meal-planning, etc. — done with the intent on “getting ahead” so I could come home and relax at the end of the day.  Ha.  Then I got ready for work, drove to work, did my work, and after work, picked up the hubby where he worked.  By the end of the week, I was toast.

The following week, Plan B went into effect.

I “slept in” until 5:00 a.m., got ready for work, rode with the hubby into town (who dropped me off an hour and a half early, or an hour an a half less sleep…), where I wandered up and down the sidewalks “at my leisure” until starting time — the appeal of which wore off after the first two days.  There’s only so much window shopping you can do in a three block area.  And 105°.

After work, the M of FW retrieved me on his way by and whisked me home, where I’d launch into all the things working women cram into their evening hours (laundry, house-cleaning, meal-planning…) until I dropped into bed exhausted.  Toast, times two.  Something had to change.

Wonder of wonders, I discovered we have public transit here.

Now before y’all start wondering, “Why didn’t she take the bus in the first place?” remember… I live in rural Oklahoma.  Bus stops are few and far between.  (As in: almost a mile from our house.)  But they sure are pretty.

And bear in mind, I haven’t hauled my half-century-old carcass up anything steeper than a recliner in a long time. 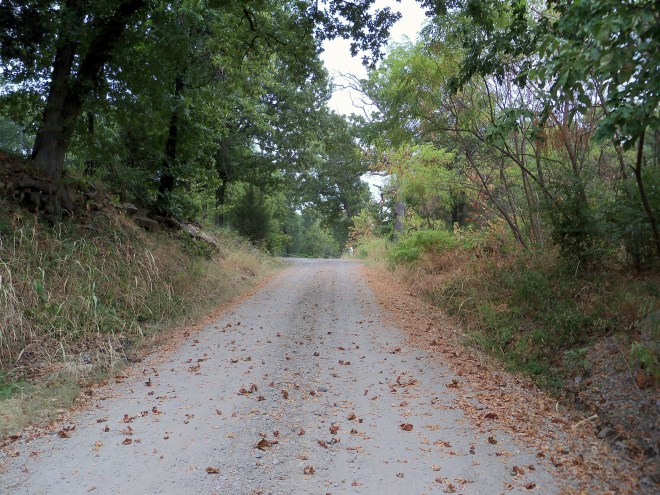 But I can tell my children, “When I was your age, I walked up hill both ways!”

And it’s worth the climb.

Bonus points for my new “fitness plan.”  Now I can eat toast whenever I want… “yummy, slathered in butter, “why wait for the weekend?” kind of toast.  Life is good.

Enjoying one hill at a time,