“When we cannot find contentment in ourselves, it is useless to seek it elsewhere.” ~ Francois de la Rochefoucauld 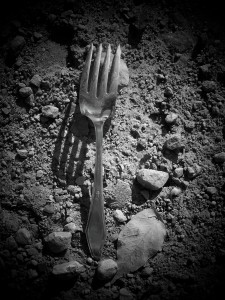 “What in the world did I get myself into?” she wondered.

A pair of fluorescent bulbs flickered overhead, buzzing their swan song as she stared at a stream of water filling the commercial-sized sink.

An icy wind rattled the window above the faucet — a sharp reply to her dull existence.  Instinctively, she pulled her frayed sweater tighter, closer.

She was used to the cold; for years, it pervaded every part of her being, inside and out — she combatted it by adding more layers.  Inside and out.

But now… thinking about tonight’s dinner menu… there was an unfamiliar warmth.

The cook at the halfway house was lousy, and lazy.  Everyone complained about his cooking, but no one was bold or brave enough to confront him.  Until last night.

Armed with the knowledge that there were freezers full of roasts and steaks in the garage (a surreptitious bit of info gleaned from the underground) and a pantry filled with untapped possibilities (she’d peeked in it herself), she glanced at the pile of ‘glop’ in front of her and said (mostly to herself), “I can’t eat this.”

“What did you say?!” the cook challenged from the head of the table.

A voice from somewhere deep within her repeated, “I can’t eat this.”

There was no accusation in her tone.  Simply a line drawn.  And one she would never cross again.

Her housemates were aghast, then encouraged.  One by one, they broke the silence.

“I’m tired of eating this… stuff.”

She held her breath, waiting.

Mr. Lousy-Lazy-Halfway-House-Cook jumped up and snarled, “If you think you can do any better, here!”  He flung a set of keys onto the table and huffed out of the room.  Nobody stopped him.  It was culinary mutiny.

They turned to look at the instigator.

“Will you cook for us?” someone asked expectantly.

“Can you cook?” asked another, snickering.  A round of laughter broke out, then suddenly quieted.

She considered the task — and the group — for a moment.  Twelve hungry souls, including herself.  They needed more than food, but it was a start.

Grabbing the key ring before anyone else could, she shoved her chair back — away from the table… away from the glop — and led the band of misfit mutineers through the kitchen, out the back door, and into the cold.

Ignoring it’s sting on her layerless form, she inserted a key into the padlock and whispered, “Pandora’s Box or pirates’ treasure…”

The lock yielded and the group tumbled inside, searching for something — anything — palatable.  Freezers were flung open and oohs and aahs ensued as an arsenal of food revealed itself.

The truth came to light.

Mr. Lousy-Lazy had been holding out on them.

She turned off the faucet and plunged her hands into the soapy water.

Basking in the warmth for the first time in a long time, she thought about food.

Even in a cold, dark kitchen.

Some of my most life-changing decisions have been made over a sinkful of dishes.

27 thoughts on “The Path Of Acceptance”