Whether you spell them portabellas, portabellos or portobellos, mushroomy goodness awaits — particularly when paired with porkchops.  As promised, I’ll divulge the recipe.

I’d like to thank Paula from bell’alimento for her inspiration for this dish, as well as for the LeCreuset French oven I won earlier this winter.  (One benefit of blog world is connecting with generous friends who sponsor give-aways and the generous folks who sponsor them.)  Thank you so much.  I’ve been having fun with it ever since!

I chose mine in a gorgeous Truffle color…

Although truffles weren’t in the budget, portabellas were.  Here’s my adaptation of the original recipe…

Deglaze skillet with wine.  (Add a little at a time and scrape the fond to incorporate all of the flavor.)  Add sliced garlic and minced rosemary; lower heat.  Simmer until sauce is reduced to your liking.

Carefully pour sauce into French or Dutch oven between and/or around (not over) pork chops.  Cover and place in oven.

Bake approximately 30 minutes, until pork chops are tender and cooked through.  Remove from oven; allow to rest for 5-10 minutes.  Serve with rice or noodles, topped with Portabella Mushroom Sauce. 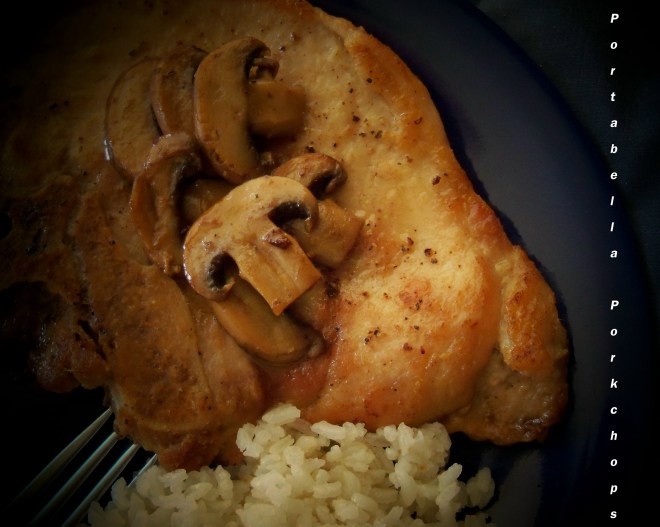 Wishing you a hearty and yummy (not to mention mushroomy) New Year!

P.S.   I’ve been making some changes to my blog, including the addition of “Facebook page live.”  Please be sure to join there and/or like me (gratuitous plug…)  The more, the merrier!