For nearly a decade, I hauled goods that ultimately ended up in the hands of the consumer.  Although most of my loads consisted of the large variety (steel, glass, and lumber for future shopping centers, hospitals, and homes), I occasionally toted canned goods or department store items.

Once, I even hauled a load of wine bottles to a vineyard. :)

Which reminds me… now that the season of accelerated wining and dining and shopping is upon us, be sure to thank a truck driver.

As a professional driver, it was my responsibility to pick up cargo on time, secure it safely, and make delivery dates before the appointed hour.  Although grueling at times, trucking allowed me to crisscross 45 of the 48 contiguous United States and see some of the most spectacular scenery you could ever hope to see.  It also gave me an opportunity to sample some fabulous regional food.

The first time I had Migas was at a café in Brownsville, Texas after I’d read a post by The Pioneer Woman.  She extolled their virtues in terms I could understand (divine and heavenly, to name a few) and I agreed with her assessment from the very first bite.  Thanks, Ree!  A girl can work up a powerful appetite driving all the way to Brownsville.

Interestingly enough, Migas means different things in different parts of the world.  In Spain, they’re made with day-old bread, olive oil, garlic, and spinach — or alfalfa.  In Portugal, they’re made with bread, garlic, olive oil, wild asparagus, tomatoes, and fresh coriander.  (For a few other interesting variations, click here.)  Down South (or at least farther South than Oklahoma), Migas consist of eggs scrambled with tomatoes, onions, peppers, corn tortillas, and cheese.

The culinary term “deconstructed” has been rattling around in my brain for awhile, so I decided to give it a go.  Not sure what to deconstruct, I opened my fridge… 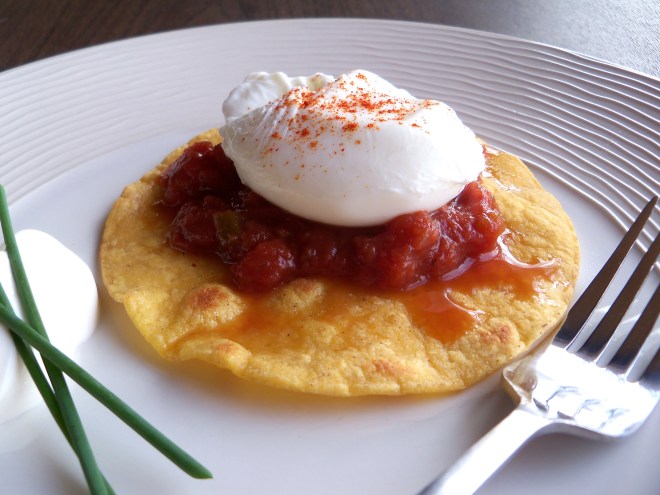 Melt butter in a small skillet until sizzling.  Add corn tortilla.  Fry until crisp on both sides; set aside to drain on paper towels. 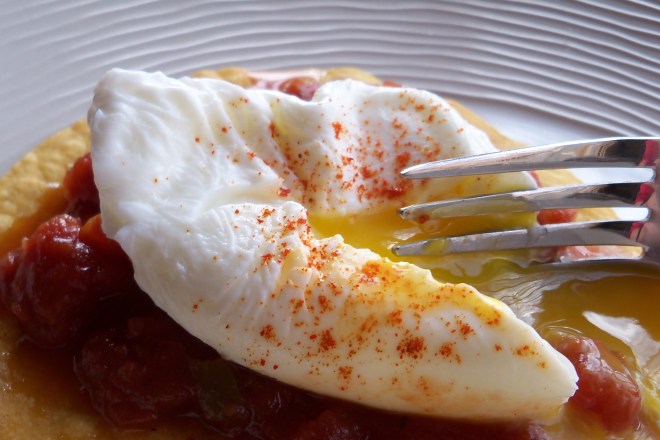 Place tortilla on a plate and mound salsa in the center.

(I used Salsa Me Krazy, which I won on basilmomma‘s show, Around The Kitchen Sink.  Thanks again, Heather and Brenda!)

Top with a poached egg and sprinkle with smoked paprika.

Garnish with a dollop of sour cream and chives on the side.

P.S.  This recipe (along with dozens of more favorites from around the world) is featured in Jane Sarchet’s FREE e-cookbook, Project Egg.  For details, click here.