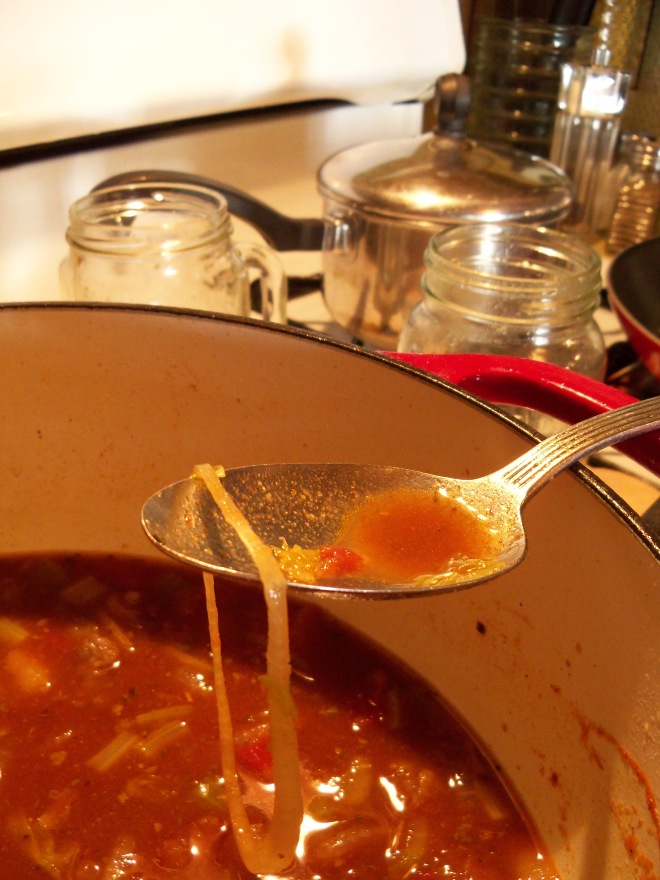 My schedule is absolutely insane the next two weeks, so I’m relying on your good graces and a few one-dish wonders to see me through.

It’s not that I bite off more than I can chew, it’s just that piano players are in demand this time of year.  I’m talkin’ seven rehearsals, four gigs, two performances, the children’s Christmas program, and a guest speaking engagement I volunteered to do without checking my calendar first (!) — which includes playing the piano.  Basically “a partridge in a pear tree” kind of insane.

Speaking of biting off more than you can chew…

Back in the 80’s there was a fast food commercial that amused me no end.  In it, a feisty ol’ lady would holler, “Where’s the beef?!”

I thought of it the other day when I divided up a chuck roast — half of it for “roast,” a fourth cut into cubes for stew, and the rest sliced and pounded for Swiss Steak.  Three meals outta one roast ain’t bad!

My meal planning was also assisted by a giveaway I won.  (Thank you, Jenny at Savour The Senses — what a treat!)

I’d never used Muir Glen tomatoes before, so I wanted to make something special with them.  Let’s see… one for manicotti, one for Super Nachos, one for stew, and one for Swiss Steak.  Four meals outta one gift box ain’t bad either!

Getting back to the topic at hand, it had been awhile since I made Swiss Steak and I didn’t want to make just any ol’ version of it with those delectable tomatoes.  Lo and behold, Alton Brown’s name came up in my search… and you know how I feel about Alton Brown.

So, I sauteed and stirred to my heart’s content (in between piano practice) and shouted, “Where’s the beef?!” — just for fun.

Place flour in a pie tin (or on a plate); dredge meat in flour.

Place meat between two sheets of plastic wrap; pound until thin.  (I used my rolling pin to aid and abet this process.)

Dredge meat in flour again; shake off excess and set aside.

Meanwhile, heat oil or drippings in a Dutch oven ’til shimmering.

Add a few slices of beef at a time (don’t crowd); sauté until golden, about 3 to 4 minutes per side.  Set aside to drain on paper towels.

In the same pan, add onion and celery; sauté until softened.