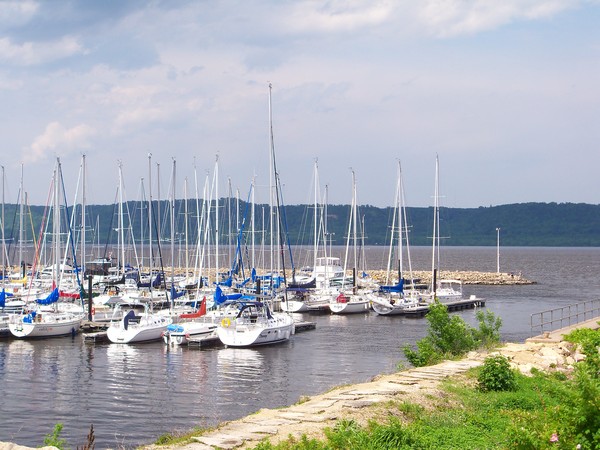 In my lifetime, I’ve paddled, rowed, trolled, pontooned, canoed, and boated, but I’ve never gone sailing.  It looks so serene.  (Or maybe I don’t have a clue and it’s really hard work, but the idea still appeals to me.)  Wind-driven bliss…

These shots were taken on an outing with my son (when I was in Minnesota), including a stop at Slippery’s Tavern (in Wabasha), featured in the movies “Grumpy Old Men” and “Grumpier Old Men.”  Yup, there really is such a place.

Apparently the local Hot Rod Association was having an outing, too.  This one was my favorite… :)

Although the “new” Slippery’s doesn’t resemble the one in the movies, it was still fun to sit on their waterfront veranda and watch the boats go by.

Which reminds me… whatever means you use for water fun, please be safe!  You don’t want to end up at the bottom of the lake like I did.  (Say what?!)

When The Man Of Few Words & I first moved here, we were anxious to launch our newly-acquired (albeit ancient) boat for our first-ever outing on Lake Eufaula.  Bear in mind, this lake is huge, it’s rife with obstacles (rocks, trees, etc.), and it’s 600 feet deep in some points.

After a delightful day on the water, Russ & I headed for home — not fast, mind you (we had a teeny, tiny Evinrude) — but, we weren’t wearing life jackets, being experienced sea dogs and all.

Along came a wake from a cabin cruiser farther down the lake, slowly and insidiously as “Jaws.”  Bam!  One minute I was hugging my hubby and the next, I was under water.  Besides the shock of realizing I wasn’t in the boat, there was disorientation to deal with…  “Which way is up?!”

Thankfully, I remembered the Jacques Cousteau shows I watched as a kid (funny, the things that enter your mind when you’re drowning) and did what his divers did.  Follow the bubbles.

The force from the swell and the physics involved swatted me out of the boat like a ping pong ball and catapulted me twenty feet under.  (I know this because after I stopped spinning, it took 4 or 5 strong lunges to reach the surface.)

Then I waited for Russ to come and get me.  Only he didn’t.

Unbeknownst to me, the steering cable snapped and the throttle broke off in his hand.  There he sat, hundreds of yards away, while I was treading water in the middle of a very large lake.  (Which, I can attest, is nothing like treading water in a pool.)

After shouting and waving frantically at him to throw me the “floatie” — (the floating seat cushion) (which he did, but it was still a long way off) — I started swimming toward the boat, aware that I was also smack dab in the middle of a “water traffic lane.”  Without a colorful, buoyant flotation device to alert folks to my presence, I was basically a sitting duck.

By now, I was getting tired, so I flipped over and back-stroked in the direction of my beloved, now a hundred yards off.  Incredibly, I bumped into the “floatie” on the way there with my eyes closed (!) and grabbed it like it was manna from heaven.  (To me, it was.)

When I finally reached the boat, Russ hauled me over the side and we quickly resolved “why he didn’t come and get me.”  (Never assume…)  Then, as we stared incredulously at each other wondering “what just happened?!”, the pain from my injuries and hypothermia started to kick in.

Prior to that, I didn’t realize I’d hit the side of the boat when I was pitched out; my entire left side was bruised and my ankle was swollen and throbbing.  The sun was also beginning to set and the temp was dropping rapidly.

Following a long, slow trip back to the boat landing (several miles away) with me shivering uncontrollably in a damp beach towel (which I had to share with the broken throttle handle to keep from cutting my hand) and Russ maneuvering the motor with his legs (it was the only way he could steer), we finally made it back to shore.

Moral of the story:  Wear your life jacket!  Old sea dogs can (and did) learn new tricks.  We will never go out on the water without wearing our life jackets — ever again.

Which brings me back to sailing…

Have you tried it?

This is as close as I’ve come:

Also, be sure to enter my giveaway if you haven’t already.

And most importantly — be safe!  It’s much less painful than being sorry.

Enjoying the prospect of wind-driven bliss with a life jacket,

20 thoughts on “Sailing, Sailing, and a Boating Accident”