It all began when I discovered a plate I’d tucked away several years ago. As I recall, I got it at a thrift shop and only paid a quarter for it. With visions of Plum Pudding dancing in my head, I rescued it from the recesses of the cupboard, gave it a gentle washing, and set off to learn everything there is to know about making the classic Christmas dessert. 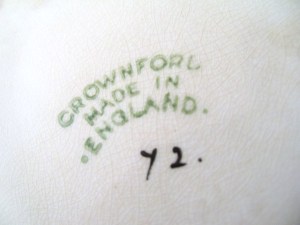 (By the way, if anyone knows about the plate or its maker, please give me a shout; I’d love to know more about them.)

Plum Pudding has a long and fascinating history (feel free to Google it) and requires a lot of advance preparation. Suffice it to say, I assembled the thirteen ingredients (representing Christ and His disciples) on “Stir Up Sunday” five Sundays before Christmas, steamed it for six hours, and sprinkled it with rum (my choice of liquor out of many possible candidates) regularly until Christmas. When it comes to cooking, there’s no detail too daunting and no ritual that goes unremembered.

First, there was the matter of finding a sprig of holly (to represent Christ’s crown of thorns) to garnish dessert in progress, and secondly, I guess I should have waited until closer to “flambé day” to pluck the aforementioned garnish from its native bush. But, I was anxious to have everything at the ready and I happened to be driving by a friend’s house early in December with said bush in their front yard…

Fresh sprig in hand, I drove home and plopped it into a ramekin, making a mental note to keep it watered until Christmas.

After re-steaming the Plum Pudding a final two hours, I nestled it on its plate and adorned it with the not-quite-as-fresh-as-it-once-was holly. Then, I set up my tripod and enlisted The Man Of Few Words’ help to fill the ladle/hold the ladle/light the ladle/pour the ladle while I took pictures (quick aside: the ladle contained warmed rum) and prepared to delight him with this new-to-us traditional dessert.

How Not To Flambé Plum Pudding: 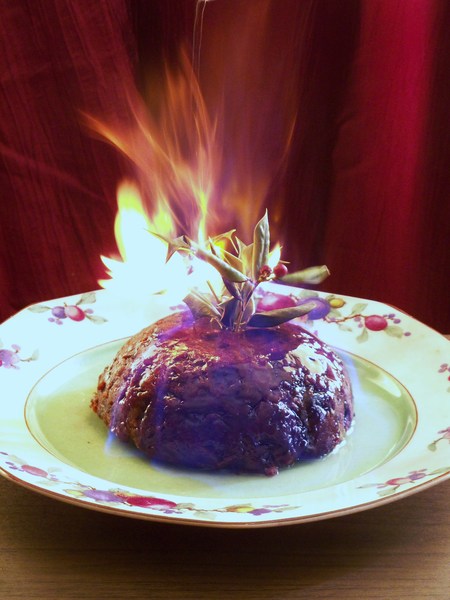 This is why folks don’t ask me to water their houseplants.

Not to worry though…

After the flames died down, the Plum Pudding was just as delicious as I imagined. (Shown here topped with Zabaione.)

And… do not try this at home.

36 thoughts on “How Not To Flambe’ Plum Pudding”