I’ve been making hamburger steaks forever. (Okay, decades…) Though not quite as “steak-ish” as the name implies, they’re still a step up from regular ol’ hamburgers. With a few extra seasonings and larger-than-burger-size patties (generally oval-shaped) smothered in rich brown gravy, what can I say? It’s comfort food!

And, they look like I worked harder and longer in the kitchen than I actually did. ;)

This week I decided to doll up the ol’ standby by adding mushrooms and red onions to my usual gravy — a happy compromise between TMOFW’s “basic” preferences and mine-all-over-the-map. 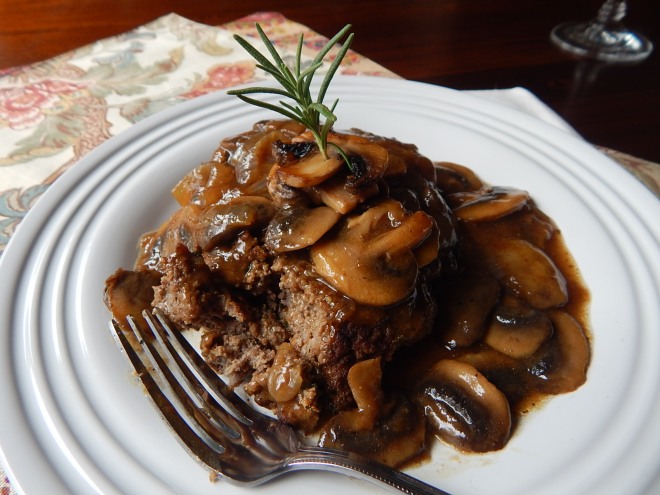 1 to 2 garlic cloves, peeled and minced

In a large bowl combine ground chuck, Worcestershire sauce, lemon juice, salt, pepper, and garlic. (Feel free to add any other seasonings if desired at this point — oregano, Herbs de Provence, marjoram, etc.) Mix lightly with your hands and form into three oval “steaks.” Set aside to rest on a plate.

Meanwhile wipe mushrooms with a damp paper towel, trim the stems, and slice into 1/4-inch slices. Quarter the onion and slice likewise.

In a large skillet over medium-high heat add 2 tablespoons olive oil or bacon fat. (I’ve been known to add a lil’ butter on occasion, too.) When oil is shimmering, add about half the mushrooms — don’t crowd in too many or they’ll steam rather than brown — and sauté until golden on one side. Flip over with tongs and brown the other side. (Regulate heat as needed.)

Remove browned mushrooms to a bowl, reserving several for garnish. Add more oil to the skillet as needed and repeat until all mushrooms are browned.

In the same skillet, add the red onion slices (and more oil) and sauté until softened. Remove onions to a bowl. (I just throw ’em on top of the mushrooms.)

Now sear the hamburger steaks (same skillet) until well-browned on both sides. They don’t need to be cooked-through at this point, just browned. Transfer to a plate again while you make the gravy.

Deglaze the skillet by slowly pouring in the beef stock and scraping the bottom of the skillet with a wooden spoon. (Flavor!) Bring to a boil and slowly whisk in your cornstarch slurry. (You may not use all of it — add a lil’ at a time until “gravy” consistency is reached.) Reduce heat to medium and cook for several minutes.

Stir in mushrooms and onions; season with salt and pepper to taste. Reduce heat to low and place seared hamburger steaks on top; cover and simmer for 30 to 40 minutes, basting “steaks” occasionally with the gravy.

Note: The gravy will be as flavorful (and seasoned) as your stock. Add salt and pepper judiciously. If subbing beef bouillon or canned beef broth, you might want to omit the salt altogether. (Taste as you go.)

Normally I serve these with mashed potatoes, but The Man Of Few Words took one look at all the mushrooms and said there were enough vegetables for this meal. :)

I’m ready for my close up, Mr. DeMille…

For more Comfort Food (and recipes to boot), click here and here.