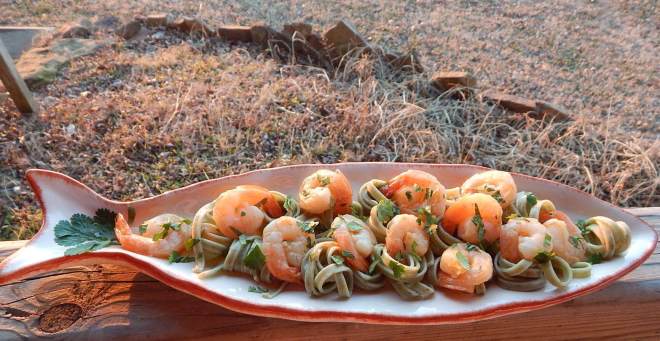 I’ve been playing with a new fish plate lately. (Picture a kid with a new toy… one that doesn’t beep, light up, come with a remote, and/or require batteries.) When the only prompt is imagination, what becomes of a toy — and the entertainment value derived from it — is entirely up to the beholder.

First up was Shrimp with Lime Cilantro Linguine — half adaptation / half inspiration (recipe later) — followed by a simple, satisfying Antipasto a few nights hence.

(No recipe… hover and you’ll figure it out.)

Then there were toast points…

I thought about making plain ol’ tuna salad sammiches for lunch one day and toast points seemed like a fun way to dress up ordinary mid-day fare. Plus, they rather resembled fish scales — in my mind, lol — and ‘the plate’ was beckoning.

(I get a lot of mileage out of my imagination and the few ‘props’ I’ve managed to acquire — and experimenting with settings on my camera. ;) 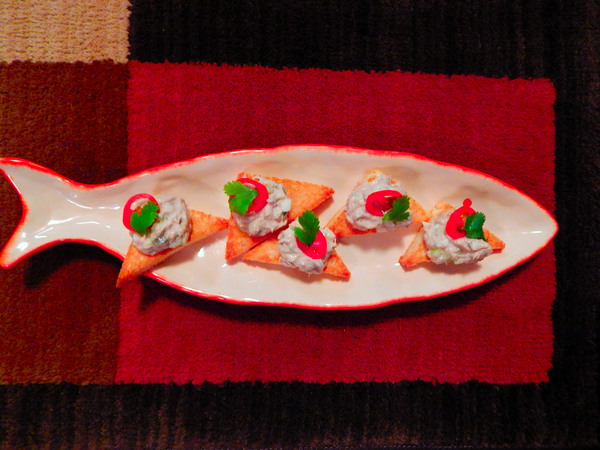 2 oz. tequila (I used one of those airline-sized bottles of Cuervo Gold cuz Margarita season is still a few months off)

1 to 2 Tbsp. freshly squeezed lime juice (or more, to taste)

Prepare pasta according to package directions until al dente. Drain, but do not rinse. Plate as playfully as you wish. I had fun “swirling!” (The pasta, not me.)

Meanwhile make the sauce. Melt 1 tablespoon butter in a small saucepan over low heat. Add the brown sugar and stir until dissolved. Add tequila and lime juice. Increase heat to medium and stir constantly until the alcohol evaporates. (Mandatory taste testing is required to adjust the lime juice “to taste”… of course.) Remove pan from heat and add the remaining tablespoon of butter; stir until melted. Cover to keep warm.

Next make the shrimp. In a small skillet over medium heat warm the olive oil until hot. Season shrimp with salt and pepper to your satisfaction. Sauté briefly on both sides. (Add more olive oil if needed to keep shrimp from sticking.) Transfer sautéed shrimp to saucepan; stir gently to coat with sauce. Pour shrimp & sauce over plated linguine and garnish with cilantro and lime zest. Serve immediately.

Note: I intended to present this dish per Dennis’ original recipe with pan-seared fish, but my fillets fell apart. (My fault, not his — I used flimsy flounder instead of red snapper.) But it sure made a tasty “side” and it left more sauce for the shrimp! Win-win. 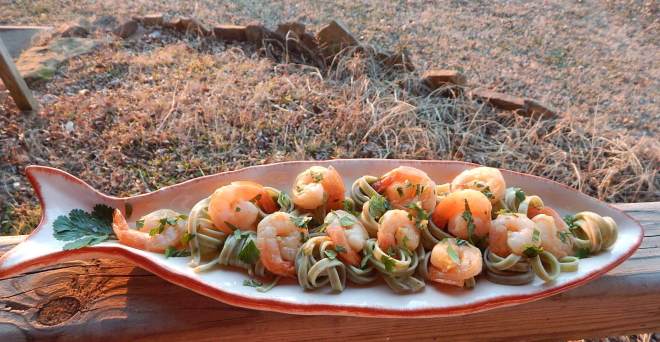 On a personal note, The Man Of Few Words and I are still in limbo this many months after the fire, but we’re hoping to be in our next home — a “fixer upper” — in early March. That said, I’ll be Gone Fishin’ the next couple weeks helping that beloved man o’mine with repairs.

Many thanks to each and every one of you who have contributed to the fundraiser my daughter started for us. We’re soooooooo grateful for your help! Temporary life (even ‘foodie life’ with just a few “toys”) has been blessed because of your kindness and caring. Thank you xo.

Now, go… have fun with your food (and props)… and hug your loved ones close! I’ll catch up with you soon.

Enjoying food tremendously- even when it’s served on the same plate twice… or three times, ;)